Rento is a board game in which can play 2 to 8 players.
The game is similar to Monopoly game, but there are differences.
Players take turns in order, which is determined by the game randomly.
A typical turn begins with the rolling of the dice and advancing their piece clockwise around the board the corresponding number of squares.
-If a player rolls doubles, they roll again after completing their turn.
-If a player rolls three consecutive sets of doubles on one turn, the player has been "speeding," and is immediately sent to jail (which ends his turn) instead of moving for a third time. A player who lands or passes the red "start" space collects $200 (unless they automatically go to jail)
Players who land on either "Income Tax" or "Super Tax" pay the indicated amount to the bank. 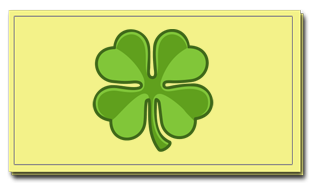 If a player lands on Luck or Community Vault, they draw the top card from the respective pile and obey its instructions.
This may include collecting or paying the bank a specified amount of money, or automatically moving to a specific space on the board.
Two types of cards that involve jail, "Go to Jail" and "Get Out of Jail Free", are explained below. 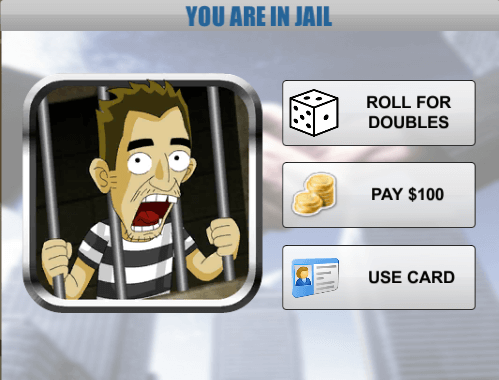 A player will land in jail if they land on "Go to Jail", OR throw three straight doubles in a turn, OR draw a card saying "Go to Jail".
When a player is sent to jail they move there directly ("Don't collect $200.") and their turn ends.
If the player is not "sent" to jail but just lands on that space, they are "Just Visiting", incur no penalty and move in the usual manner on their next turn.

If a player is in jail, they do not take a normal turn and must either pay a fine of $100 to be released, use "Get Out of Jail" card, or attempt to roll doubles on the dice. If a player fails to roll doubles, they lose their turn.
If they fail to roll doubles three times, they are released from the jail automatically.
Depending on the game settings while a player is in jail, they collect or not rent. However, they may sell, trade and mortgage properties, purchase buildings, participate in auctions.
If a player does roll doubles to exit Jail, they immediately move according to the roll.
If the player instead pays the $100 fine or uses a "Get out of Jail Free" card and then rolls doubles, they are required to move the amount shown on the dice and then roll again.

If the player lands on an unowned property, whether street, railroad, or utility, they can buy the property for its listed purchase price.
If they decline this purchase, the property is auctioned off by the bank to the highest bidder, including the player who declined to buy.
If the property landed on is already owned and is not mortgaged, they must pay the owner a rent and the price depends on whether the property is part of a set or it has buildings.
When a player owns all of the properties in a color group and none of them are mortgaged, they can build on them during their turn.
Building involves buying houses or hotels over the property spaces, and they must be placed even across the group.
Once the player owns an entire group, they can collect double rent for any undeveloped properties within it.
Although houses and hotels cannot be built on railroads or utilities, the given rent also increases if a player owns more than one of either type.
Your goal of the game is to acquire monopoly and bankrupt the other players by having many properties on which you collect high rentals.

A player who cannot pay what they owe is bankrupt and eliminated from the game.
To avoid bankruptcy, player can sell houses and mortgage properties.
Player can also avoid bankruptcy by asking for good will loan from other player.
If the player is unable to pay off all of his debts, he declares bankruptcy and all of his properties become owned by the bank.
Winner is the remaining player left after all others are bankrupt.

When player lands on FREE Parking - no rent or other fee is paid.
But if "Profit free parking" setting is turned on - then the player receives super taxes accumulated by players so far

How to build houses ?

To build houses or hotel on a certain land - you have to be on turn and MUST OWN ALL PEOPERTIES OF THAT LAND (i.e. all properties of same color)
Once you have them:
1) click on BUILD button

2) click on the shining lands to build houses on them.

How to mortgage property ?

Mortaging property works the same way as building/selling houses.
First you click on MORTGAGE button and then you click on lands you want to mortgage (they are shining).

After that they become red, but you can unmortgage them the same way - using UNMORTGAGE button.

How to TRADE with players

When you are on turn, simply click on TRADE button and trade dialog will open: 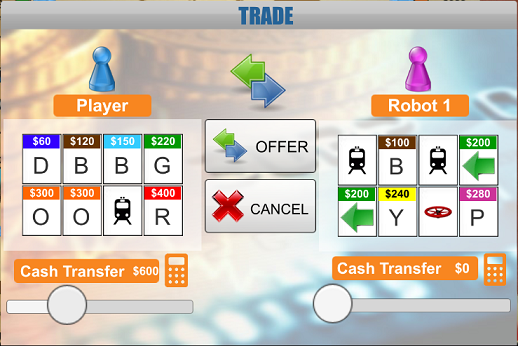 Speed dice allows you to end games faster. The six sides of the dice has special icons which are explained below:

Star. This multiplies the value of the two main dices


Roll again. This icon means that you will roll one more time.


Buy next. This means that after completing your turn, you will move to the first unowned land and have the chance to buy it


Pass. If you see this, you skip your turn and next player takes place


Choose dice. You can choose which dice to play. You can either play the left dice or the right dice or both


Six. You simply add 6 to your other two dices (play the total sum of the three dices)

When players land on "Wheel Of Fortune" square, they have to roll the wheel and follow the slice instructions: 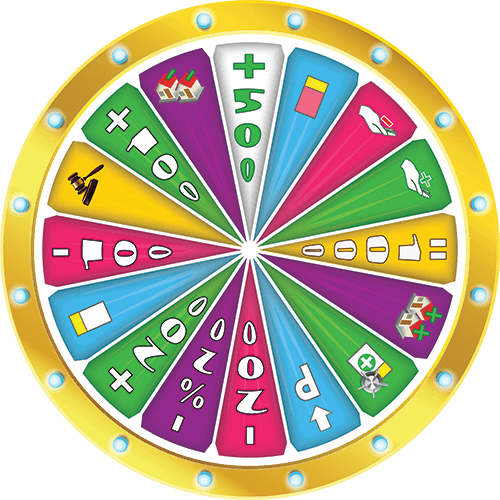 
If you land here, you will have to mortgage land by choice and will not get money for it.

When you land on "give" you haveto give $100 to the player with least money.

When you land on "get", the richest player must give you $100 cash.
Parking icon tells you to move your pawn to the parking spot.

Russian Roulette is a cell, which is available on some themed boards of the game. 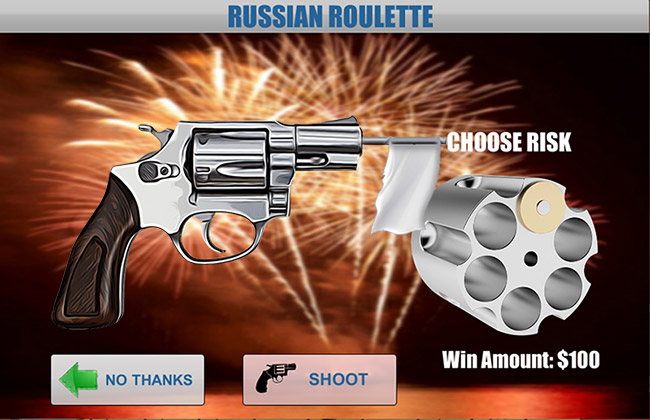 If you choose the game option to play with "Strategy Cards" in each turn you will have the option to either roll the die, or play one of your 3 strategy cards, that are randomly given to you at the game start.
Some of them allow you to move your player or other players around the board, or swap places with other player.
Others are changing rents or costs of some lands or houses.
Some can save you from bankruptcy, or put other player in jail.
They can also allow traps/lightnings or olympics to be placed or activated.
Here are listed all possible strategy cards: 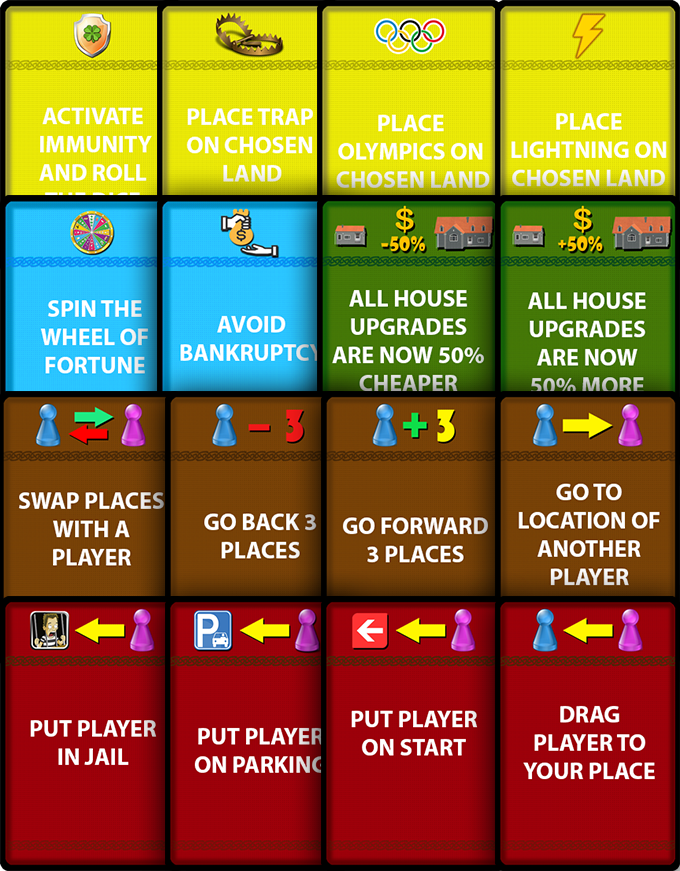 That's all. You can now start becoming a millionaire. Good luck.